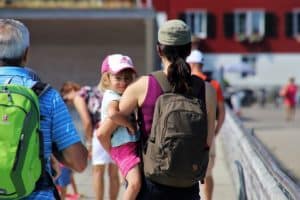 Stephen Jones was sentenced to 60 months’ incarceration and a four-year term of supervised release after pleading guilty to one count of conspiracy to possess and distribute heroin and cocaine. His request for compassionate release was based on several factors, including his underlying medical condition of both obesity and asthma, putting him at risk of severe complications were he to contract Covid-19. Due to being incarcerated, Jones was at increased risk of contracting the virus given the difficulty of curbing the spread of infection in a correctional facility.

Additionally, Jones pointed out that his family circumstances, including the difficulty his partner faces balancing work and childcare during the pandemic, weigh in favor of his release. Jones’s son, who has been diagnosed with autism, has been unable to attend school or special education classes because of the pandemic. His partner has had to adjust her work schedule to work night shifts so that she can spend the day helping their son attend special education classes remotely. She notes that Jones has been a very involved parent and that before his incarceration, she relied on him for childcare. Finally, Jones pointed to his exemplary disciplinary record while incarcerated and his participation in drug education to argue that he has made significant progress toward rehabilitation.

The court agreed with these arguments, and as a result, because they feel that Jones does not have serious concerns with regard to recidivism or public safety, the request for compassionate release was granted. His health and family conditions played a key role in his compassionate release.